[Prelude: Life is good, real good.  Figured out how to embed the video that I hadn’t been able to add to the previous version of this blog post.]

Well if you’re going to get seduced by something, it might as well be the restoration of your soul.  Didn’t know I needed it, but a light breeze is coming in through the front door of the double-shotgun where I stay when in New Orleans (https://www.airbnb.com/rooms/71624), giving me a view of a weathered fence beside a more weathered house, and behind it a more freshly painted purple and burgundy job, and I am enjoying just the right kind of hangover.  The kind where I got drunk on one beer and a six-pack of New Orleans vibe.

Started with Amanda Shaw and the “Cute Guys” electrifying the crowd at the Louisiana Seafood Festival at City Park (not such great quality video, but Ms. Shaw and company’s sound makes up for it)

Continued at the Spotted Cat on Frenchmen 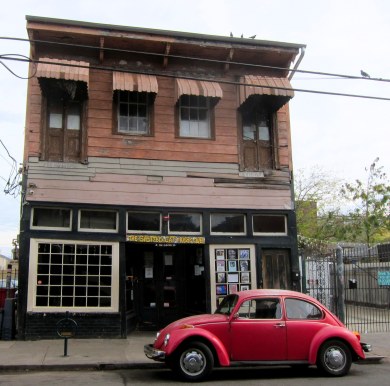 where a fusion trad jazz-funk band got a bunch of us on our feet and kept us there.  Before I knew it, a young hottie was flirting with me while the band played “I’ll Fly Away.”  She ditched me, though, for someone twenty years my senior.  Can’t blame her; he was a better dancer.

And then, it was John Boutte across the street at dba doing:

Somewhere, it dawns on me that I’m having a religious experience.  In the way that happens here at its best, it’s not just about performing, it’s about connecting.  So Boutte gets a “young cat” onstage for a duet on “At the Foot of Canal Street,” and tells us whatever stories are on his mind about his day and his life.  Next thing I know, a young couple have pushed their way in front.  I’m annoyed at first, but admit to myself that it’s sweet the way he really wants her to be close to the stage.  Then I notice their wardrobe.  He’s in a tux, she’s in a wedding gown. And Boutte tries to get the back of the house to hush (“that’ll never happen,” someone shouts out….dba is long and narrow and if you’re far away from the stage, you can’t see the performers) so he can sing a love song for them.  And then he ends the show with his Treme theme song, the newly married couple leading in the joy of it all:

When all’s said and done, he signs a couple of CDs for me, tells me about the time he saved Massey Hall in Toronto from going down in flames when a fellow performer tossed a cigarette in a trash can, and I talk about the connection I saw on stage and with the audience, and how it had the quality of a religious experience.  This weirds him out, I think, but I also think he can take it.

Oh, plus I discovered a delightful lyric in another song by someone I now know was named Little Milton:

If I don’t love you baby

And Mona Lisa was a man