While I Live (I Better Second Line)

Although I’m starting to turn my attention to a blog series I’m planning on launching shortly about Montreal, it appears – unsurprisingly – there’s a little New Orleans still in my system.

Just a bit ago, while on Rue St. Laurent / St. Lawrence Street, I started thinking about some walks I’d like to take in Montreal.  The phrase “take that walk” playing in my mind swiftly morphed into Kermit Ruffins’ “When I Die (You Better Second Line),” which I’ve been listening to on a daily basis.  Though I didn’t conduct a systematic survey, I’m pretty sure I was the only person on St. Laurent slipping into a strut and waving an imaginary handkerchief.  It didn’t last long, but the moment had to be respected. 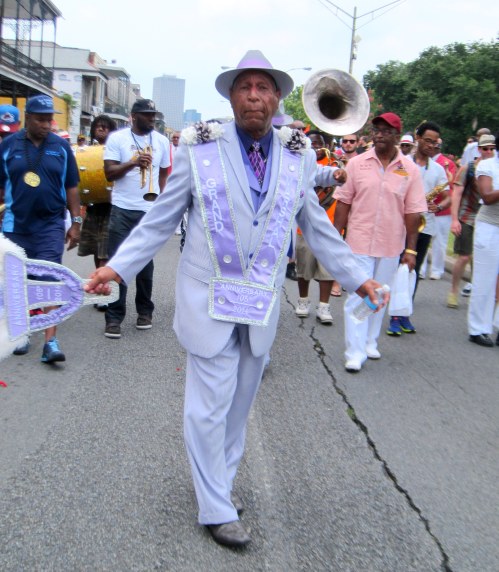 (Quick and hopefully painless tutorial section.  What’s a second line?  Basically, it’s a New Orleans tradition where you’ve got the leaders (the “first line”) in a brass band parade in front, then the band itself, then the “second line” AKA everyone else who wants to step into the streets and join in the strutting and marching and joy.  The second lines with which I’m most familiar are at jazz funerals, where the departed is accompanied to the cemetery with dirges, and after they’re laid to rest, have their journey onward celebrated with exuberance.  Or they’re celebrations by Social Aid and Pleasure Clubs, originally created when African-Americans were unable to obtain insurance and formed their own mutual aid societies, celebrating once a year with parades through the streets in matching suits designed for the main event.)

This past Sunday, following the jazz mass at St. Augustine’s Catholic Church – imagine “cooling off” by stepping out of a non-air conditioned church into a refreshingly humid 34°C – there was a special second line back to Satchmo Summerfest. 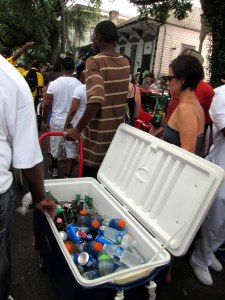 Seeing the pictures I’ve included in this post, a friend of mine responded by saying, “Joy is a serious business in New Orleans.  The only people smiling are the white tourists.” 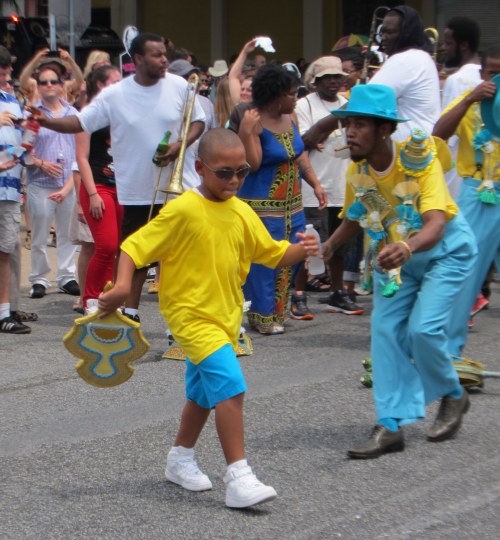 Well, sort of.  Joy IS a serious business in New Orleans, because joy isn’t always about being smiley.  Not while you’re strutting and dancing and baking in a suit in 34°C, and showing your pride (though these guys were smiles aplenty when it was all done and they found a shady spot with water or beer).  As for the white tourist thing, well kind of but not exactly.  There were plenty of non-white revellers, and a lot of us were either locals or people like me, enough of a regular to be somewhere between local and foreign.  Nor are all the Social Aid and Pleasure Club members black.  For instance, when I joined in for last October’s parade by the Prince of Wales club (video below), one of its heralded members was outgoing president, Joe “White Boy” Stern.

Anyway, that’s all sounding a little too dispassionate for such a non-heady affair.  The point is…

while I live, I better second line

You tell it, Kermit Ruffins (the song’s his, and the visuals are a montage of second line footage from the Treme television series, in which New Orleans itself is the star):

And one bonus video.  The Shotgun Jazz Band performed “Over in the Glory Land” at the festival, and the band at the jazz mass at St. Augustine’s performed it the next day.  A lot of young people get the idea of tradition in New Orleans.