Rivière-des-Prairies or Bust: Part Seven – The Power of Here

The posts in this “Rivière-des-Prairies or Bust” series are self-contained, but by way of background…these are “field notes” of my efforts to walk in a mindful way westward from my Mile End, Montreal apartment until I reach Rivière-des-Prairies.

The final leg of my trek from Mile End to Rivière-des-Prairies took me through the Bois-de-Liesse Nature Park.  When I arrived at the riverbank, there was a damp and earthy pungency in the air that made me want to burrow into the muck and settle there for years.

There were also mosquitoes that made me want to slap myself silly and take them down.  Instead, though, I blew them off my arms and flicked them from my neck as gently as I could, reminding myself that pissing me off is not their only sacred role in the universe.  I recited the blessing with which I celebrate the intricacy of nature:

Blessed are You, The Provident, who gives the bird of dawn discernment to tell day from night

It didn’t reorient my relationship to the mosquitoes as much as I would have liked, but at least I tried.  Just as I tried to and sometimes found aesthetic appeal in the concrete crossings through which the park took me. 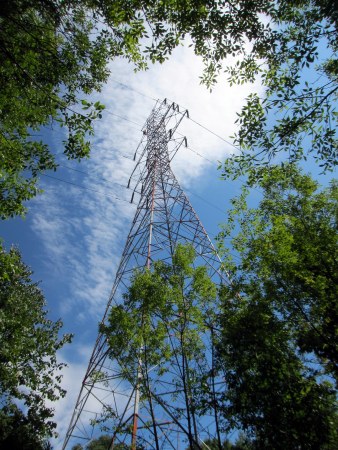 Looking back, these seven walks were a source of constant astonishment to me.  While most Montrealers would regard rambling from Mile End to the Rivière-des-Prairies to be a major expedition, the truth is it was only about sixteen kilometres (ten miles).  I needed several stages because I’m a slow walker, spent a lot of time sitting and reflecting, and went two or three hours at a time, but most of us could do it in a single day with modest effort.

Still, these Montrealers are onto something, because in that single day, one would travel through many worlds – a neighbourhood of walk-ups, two upper-middle-class communities, nondescript commercial streets, a soothing cemetery, a magnificently artistic subway station, concrete and asphalt deserts, over and below highways, unexpected woods beside an unexpected library, and an equally surprising and genteel community of trailer homes in the shadow of an airport.  One would encounter Hasidic Jews and hipsters, suffering homeless and kind police officers.  Just as I went from ebullience to tedium, despair to relief, amusement to envy, music to silence. 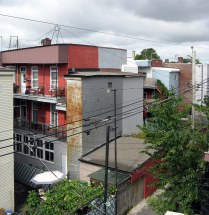 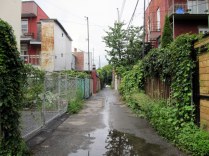 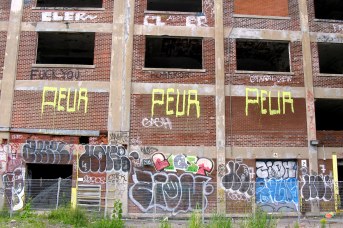 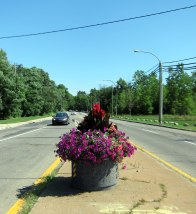 Which brings me to the power of here.  Intellectually, there was nothing astonishing in these walks (except perhaps the subway steps – see Part Four in this series).  Everybody knows there are noisy highways beside quiet neighbourhoods, and that mind states go back and forth between pleasant and unpleasant.  But while my mind may have known there was a river out there, until I came within whiffing distance of the muck, my body was convinced when amidst the concrete that it lived in a world of concrete, and was astonished to discover anything else.  Just as I am prone, when in unhappy states of mind, to disbelieve I will feel any other way.  Which is one of the reasons I meditate.  More on that later, perhaps.

In the meantime, I highly recommend pointing your compass in one direction or another, and seeing where it takes you.

Next up: a post about one of the best chance encounters (or was it?) I’ve had in a long time.