Sometimes all it takes to act like a better person is to get in the habit of expressing gratitude to God.  That, and having someone with a cane chase you down in the street.

Most days on my way home from work, I pass a man holding out a cup for change.  He’s the kind of person you want to help – older yet innocent, often quick to recount the generosity of others with wonder and wide blue-grey eyes, and usually appreciative of whatever you give him, even if it’s just a “hello, how are you?”

If you’ve got time, he’s usually got a story or a quip.

Once, as I passed by with a slice of pizza and a root beer, he took a look at the can.

“I don’t really like diet drinks,” I said, then patted my stomach and added, “but maybe I should get in the habit.”

“Nah,” he said, his eyes sparkling as he broke into a mischievous smile.  “That’s just baby fat.”

On a different day, not long ago, I dropped some coins in his cup and continued on.  Half a minute later, I suddenly heard shouting from behind.  I turned to see him hobbling on his cane towards me, as fast as he could manage.

“I don’t think you meant to do this,” he said, reaching into his cup and pulling out some subway tokens I’d given him by accident.  Worth about three dollars each, they could have been a windfall, but evidently, at too great a cost to his integrity. 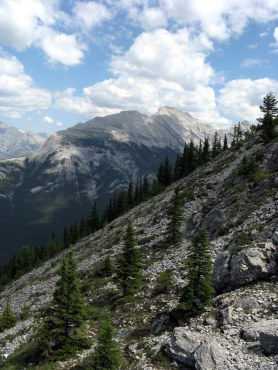 …I remember the delight he’d once taken in the t-shirt of a passerby, with its image of a grizzly bear.  And I recall his references to his years living in the north.  As far as I can tell, he’s a nature lover.  My role is clear.  The next time I do laundry, I take a t-shirt I’ve seldom worn from my dresser, and give it an extra washing.  I got it in Banff a few years ago, and it has an image of the Rockies.  Though I’ve worn it a little more of late, it remains on my clothing B-list.  I’m sure it would fit him, and he’s bound to enjoy it more than I have.

When I offer it to him a few days later, he says, “I love it already.”  The truth, though, is that he seems to be in a glum place, not taking pleasure in much.  Nonetheless, as he stores the shirt in his knapsack for safe keeping and I start to leave, he makes me wait until he pulls out a chocolate drink someone had bought for him, and hands it to me.

As if being able to give him the t-shirt hadn’t been reward enough.

and parting with them sooner rather than later?