Stumbling Through Blessing: Part Thirteen – The Royal We

(The thirteenth of fifteen posts about the Birkot HaShachar, the Jewish morning blessings, and the role they might play in helping us – Jews and non-Jews; believers, agnostics, and atheists – live with more gratitude, presence, and even compassion.  Part spiritual reportage, part suggested practice.)

I don’t know if all is vanity, as Kohelet would have it, but the last couple of hours have been replete with reminders that much is temporary.

I am in Scotland, sitting on a bench beside a green expanse – just beyond it, the sunlit dot of a full moon ascending through the sky above Melrose Abbey.  Or to be more precise, the remains of Melrose Abbey – built in the twelfth century, battered in the fourteenth, restored and re-ruined again, until its neighbours carted away much of  its valuable building materials.  A house built to serve the Eternal that, like all such houses, has proven a blip in eternity.

In its shadow, a cemetery where a tombstone marks the burial place of Archibald Hall and Elizabeth Hardie, husband and wife, and two of their daughters.  The dates tell us that one of the girls proceeded her parents to the grave, but nothing on the stone explains how they endured the loss.  On many of the surrounding stones, the inscriptions have eroded, even bare bones information like names and dates lost to mystery.

In the green expanse beside me, a ditch marks the boundaries of the cloisters where the abbey’s monks once dwelt.  But the ditch doesn’t and can’t say anything about their fears and delights, deeds and misdeeds, dissipated into memory dust carried by the winds into the surrounding hillsides.  Beginning tomorrow, I’ll be walking those hills, and will perhaps touch something of who they were.  Or perhaps this is psycho-spiritual-babble-prattle.

One of the other visitors to the abbey walks across the expanse singing a marching song with what seems a mocking tone.  His adult son glances my way, embarrassed.

I whisper the brucha

and consider what it might have to say about the fragility to which I am trying to bear witness. 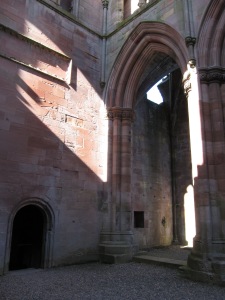 This one’s clearly not about me.  Or, at least, not just me.  It’s about all the Jewish people, and were it conceived in a less particularistic era, it might be about all humanity.  You and I and everyone we encounter are royalty, the resplendent and the weary amongst us all deserving of care, and responsible for offering it.

Here in the British countryside, on a break from the day-to-day, it’s easy to be calm and reflective, imagining myself as a vessel of patience and compassion.  But who will I be when back in the world?

This much I know.  I am almost always happier when ambling than scrambling.  And more irritable when stressed.

That’s it!  I’ve figured it out!  I should be happy instead of stressed.  Why didn’t I think of that sooner?  Okay, okay.  No magic bullet here.  I get that.

But what if I were to run interference on fifty-plus years of bad habits and try to get a decent night’s sleep?  What if I break a growing pattern of running late?  Yes, there’s always another e-mail to compose, another blogpost to write, another way of proving I matter.  But I matter when I’m in the world, too. 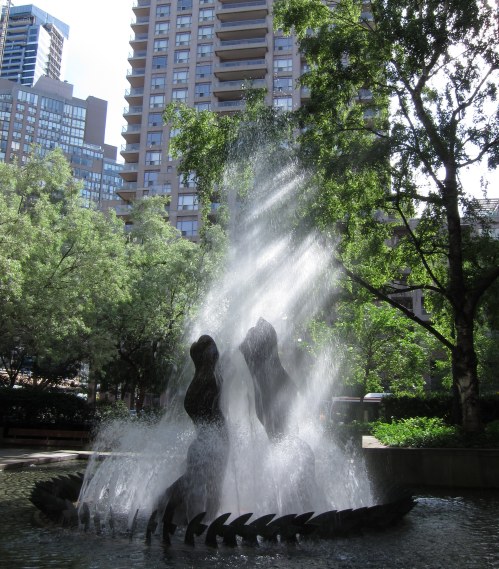 So once back home, I do my best to fend off habits that make me weary and keep me up too late, and more often get myself out the door so that I am unrushed.  And this happens…

I spot a guy sitting on the sidewalk, his oily hair swept back from his forehead, a cup in front of him.  I refrain from speculating and judging as I lean down and drop money in his cup, slow enough to make eye contact, fast enough not to make a show of it.

I delight in the sparks flying from between the legs of a construction worker soldering a metal beam, the adolescent in me thinking how cool it is that he’s farting sparks.

Because of how good this makes me feel, it changes how I am when, crossing the street, I’m forced to stop midway when a cyclist runs a stop sign.  Looking at the anxiety in his eyes, I find myself feeling compassion instead of umbrage.

A driver is laying on the horn, angry at the slowness of the driver ahead.  Feeling calm and irritated rather than wrathful, I lean down to look at him, and motion towards my ears so he can appreciate how unpleasant a blare he’s creating.  The passenger beside him flips me a bouquet of birds.  But the driver backs off the horn.

An older woman with a hunched back and a walker is crossing an intersection.  Her hot pink blouse may give her all the visibility she needs, but the traffic light goes yellow when she’s only halfway across.  I slow down to keep pace with her, two of us now visible to the drivers. 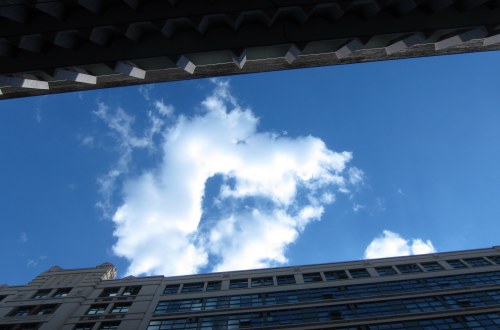 And when a pedestrian in walk-texting-browsing mode approaches, assuming I’ll get out of his way if he notices me at all, I note my impulse to let him collide into me but, in the interest of my own happiness as well as his, I  shift lanes and recite the brucha:

And there’s another form of good I can do that does not require me to be in the friendly mood I’m endeavouring to cultivate,  or to be mindful of the mortality of anxious cyclists and spark-farting construction workers.   I go online to make a monthly charitable donation.  Not royal patronage so much as an effort at human kindness.

And if you want to spread the word, there are buttons around here somewhere for sharing on Facebook and Twitter…