Stumbling Through Blessing: Part 1A – Sparrows and the City

Having mostly missed out on my Monday morning birdwatching plans (see the previous post), I decided to hang with the birds during lunch on Tuesday.

Sitting in a courtyard bordered by a busy street, I tune into their presence.  A sparrow coasts to a landing in the grass, and moments later, the shadow of another flashes across the pavement.

A braver sparrow – a tough guy, city sparrow – begins foraging for crumbs near my feet, trotting on the tile and grass.  The chirping of the flock softens the din of the nearby traffic.

In paying more attention to birds of late, I’ve noticed what a ubiquitous sub-culture they are, their song like the work of musical impressionists, punctuating the harsh urban environment with softness.

Looking more closely, I become aware of the down on the city sparrow’s neck, the nobility of its profile. 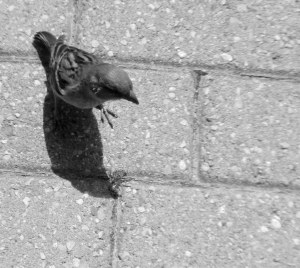 Later, when it’s time to leave, and because noticing begets noticing, I pay closer attention to the workings of my body.  It performs these actions dozens of times a day, but observing the intricate mechanics – the way my knees effortlessly unfold and straighten my body until my legs are carrying my weight – I am reminded not to take these most “basic” of motions for granted.

Brucha (blessing) time, if ever there were:

Blessed are You, Source of All That Is, who gives the rooster the ability to distinguish between day and night

As I’m about to cross a side street, a pigeon swoops its length, its long arc bringing it close to the asphalt before it rises back into the sky.  Like a superhero.

If you can, give yourself the opportunity to be in the presence of birds, and just listen.  Perhaps for five minutes, perhaps longer.  Maybe while sitting outside for a while, maybe while walking on your way.

You may be surprised with the variety of music you hear, but there’s no need to force it.  This doesn’t have to be a grand experience.  Just let it be what it is.  If you discover your attention has drifted elsewhere, gently bring it back.  If your mind is like mine and most everyone else’s, it will drift again.  In which case, when you notice this, gently draw it back once more.

You might want to recite the brucha, which for many has a way of sanctifying the experience:

Blessed are You, Source of All That Is, who gives the rooster the ability to distinguish between day and night

5 responses to “Stumbling Through Blessing: Part 1A – Sparrows and the City”