Stumbling Through Blessing: Part Four – What if God Were All of Us?

“Who’s next?” the woman working the pizza counter asks.

The guy beside me starts ordering.  Until I interrupt.

“I think I’m next,” I say.  I’m going for a neutral, matter-of-fact, tone.  Still, I wonder if the subtext I’m feeling in my heart is coming through.  The subtext that says, “How bloody rude are you?  If they gave you the guillotine, it would be too good.”  (My heart can be disproportionate where pizza is involved.)

I order a couple of slices, and consider the brucha of which I’m trying to be mindful these days

On those occasions when I recite all the morning blessings in succession, I generally enjoy this one, with its suggestion of divinity in me.

But as my sole focus, without surrounding brachot reminding me of the gifts with which I have been bequeathed, to recite it feels chutzpadik (the best translation I can offer for chutzpadik is “full of chutzpah”).  Who am I to suggest that I am in the image of God?

Especially given my conduct on the subway this morning.

I boarded the train just behind a woman with a backpack in her hand.  Then, as we stood back-to-back – despite the frequent announcements made on the subway to remove one’s backpack – she put hers on.  As her pack burrowed into my tailbone, I began to stew, not wanting to – yet again – ask someone to remove their pack (and, by extension, suggest they lack basic human consideration).

“F*^% this,” I said, startling some of the other passengers as I strode to another spot, nudging aside yet another backpack-wearer – not very aggressively, but not subtly either.

So much for being in God’s image.

Which God are we talking about?

While many of us ascribe transcendent and noble qualities to God – wise beyond our understanding, boundlessly compassionate – the God I am most familiar with is the one of the Hebrew Bible (known to many as the “Old Testament”).  A God who is sometimes transcendent, and at others, (to borrow the phrase from literary critic Harold Bloom in his The Book of J), “human, all too human.” A God of jealousy and anger, who decides to drown all living beings, sparing only Noah’s family and a select few animals.  A God who, following the golden calf episode, declares his intention to wipe out the very Israelites he has liberated from Egyptian slavery, only relenting after Moses appeals to his ego:

“Why, O Lord, [says Moses], should your wrath flare against Your people that You brought out from the land of Egypt with great power and with a strong hand?  Why should the Egyptians say, ‘For evil He brought them out, to kill them in the mountains, to put an end to them on the face of the earth?'”…And the Lord relented from the evil that He had spoken to do His people. (Exodus 32:11-14)

Yet, only a few chapters later, Moses exclaims this same God’s capacity for kindness, with what have come to be called God’s attributes of mercy:

“The Lord, the Lord!  A compassionate and gracious God, slow to anger, and abounding in kindness and good faith, keeping kindness for the thousandth generation, bearing crime, trespass, and offense. (Exodus 34:6-7)

This God is powerful and multidimensional, a source of suffering and love, destruction and compassion. 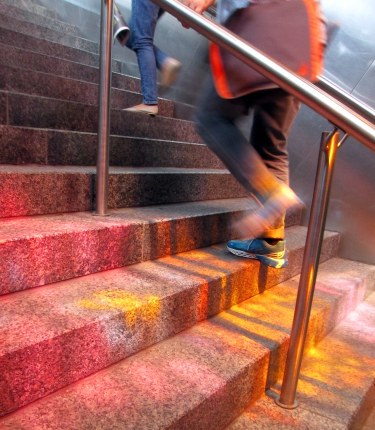 Did I cause that much suffering by how I behaved on the subway this morning?  Let’s put it this way.  I didn’t get anyone’s day get off to a good start.

So as I stand at the pizza counter beside the guy my heart has condemned to the guillotine, the least I can do in light of his overture, is commute his sentence, look at him again and say, “Thank you.”

At the close of the day, I step onto the subway again, and encounter what is often a source of ire – a cluster of passengers standing near the door, making it difficult for anyone else to board.  As I move past the crowd to make room for those getting on behind me, I calmly say, “Excuse me, I’m just going to squeeze through.”  Much to my shock, instead of being resentful, I feel happy to have been so civil and polite.  This is an image of God –  kindness trumping judgement – it would do some good to inhabit more often.

After all, I’m not the only one made in the image of God.  So are my fellow subway riders, and people I will pass on the street the next day: the young woman in fishnets, toting a hockey stick as she cruises about on roller blades,; the middle-aged guy listing to one side, dragged down by the weight of his laptop; and the fellow with the beige suit and white fedora, making mincing steps as he goes.  All with God’s capacity to create both ease and unrest.  The least I can do is make their lives easier so that they might do the same for others.

and breathe some more, and return to the world with the divine powers with which you have been endowed.

4 responses to “Stumbling Through Blessing: Part Four – What if God Were All of Us?”